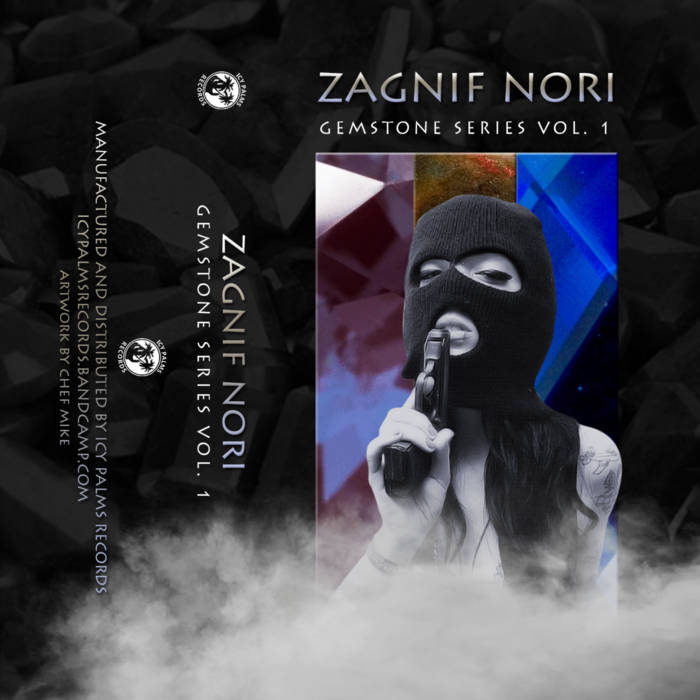 "The Gemstone Series" is a series of EPs containing 5 songs each that put Zagnif rhyming over outside production and sometimes alongside other incredible MCs outside of Noble Scity. Normally, Zagnif is tight-knit family oriented, but with this series we get to see Zagnif branch beyond the Noble Scity family and make other connections. However, the first EP in this series titled "Bloodstones", keeps the same format as usual and brings all Noble Scity brothers (Crucial The Guillotine, Danamic, Haleem, & Kaotny) into the fray just as a reminder to anyone that may have forgotten the immense talent combined into this collective. Enjoy the first installment and look forward to the next EPs in the series!

With the second installment in the series titled "Alexandrites", Zagnif gives a little different style from what you would normally hear him on. Whether it be the fast paced story telling on "Streets of Despair" or the female assassin story telling on "Interfectrix or even the rock influenced title track "Alexandrite". Whatever the song, you're sure to hear Zagnif flip some other styles over beats provided from The Quarter Inch Kings, Hooks Arthur, & Conflikt of Hellzwind. Also, featured on this EP is Hi-Speed Networks Tap-Out and the upstate NY connection with BNA (Barbaric & Alvarez Masterminded). Enjoy the second installment and look forward to the next EPs in the series!

With the third installment in the series titled "Sapphires", Zagnif brings the soul into things. The title track "Sapphire" finds Zagnif flowing effortlessly over a psychedelic soul record. We also hear the soulful blends on "Innerstand" and "Wages of War", as well as, the soulful "ayyy" on "Concrete Maze". The Bad Seed, NapsNDreds, and Rochester, NY's Azariah join Zagnif on this part of the series with production provided by Jon Rogers, Hooks Arthur, & Isac No Beat. Enjoy the third installment, check the previous if you haven't, and look forward to the next EPs in the series!

Production Credits
Tracks 1,2,3,4 By Crucial The Guillotine
Tracks 5 & 14 By Isac No Beat
Tracks 6,7,10 By The Quarter Inch Kings
Tracks 8,13,15 By Hooks Arthur
Track 9 By Conflikt Of Hellzwind
Track 11 By Bulldog Drummond
Track 12 By Jon Rogers

All Lyrics By Zagnif Nori Except where noted in the track list.