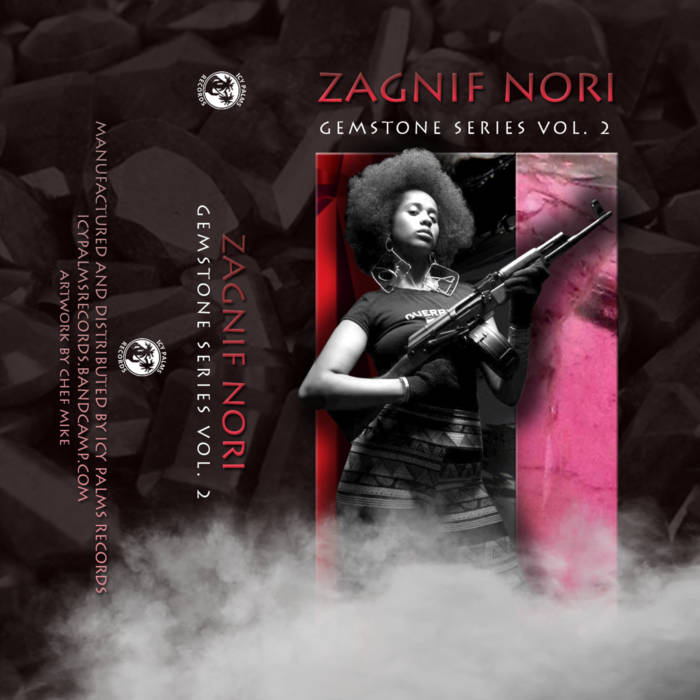 Digital's can be purchased here: noblescity.bandcamp.com/music

With the fourth installment in the series titled "Obsidians", Zagnif brings the grimy darkness into things. The title track "Obsidian" finds Zagnif weaving through an eerie Isac No Beat production. Always ready to go to war with Zagnif, King Author steps into the fray alongside Darkstar for "Deadly Messengers" over the fierce Seth Silensir production. Then we have the deadly "Purple Possum" featuring Magno Garcia, Snotty, Hooks Arthur, and Bugsy Da God. To close out the project is the hard hitting Tone Spliff laced "Importance (In Accordance)" and "Technological Advancement" produced by The Quarter Inch Kings. Enjoy the fourth installment, check the previous if you haven't, and look forward to the next EPs in the series!

With the fifth installment in the series titled "Rubies", Zagnif begins to drop some jewels. The title track "Ruby" finds Zagnif dropping jewels showing "every man's responsible for his way on his course." Next "Zenith" details the urge to man up and "handle your biz" over Castle Money Beats production. Hi-Speed Network sees a third collaboration, this time with Oak Lonetree as Oak and Zagnif crush egos and enjoy their peace over Noble Scity general Haleem's production. P.Genz slides through on a collaboration of "Rap Scholars" as they each effortlessly slide through with perfected flows and lyrics over this BesKept instrumental. Finally, Tone Spliff provides the backdrop for "Numbers Game" asking "what price is your bidding?" Enjoy the fifth installment, check the previous if you haven't, and look forward to the next EPs in the series!

With the sixth and final installment in the series titled "Garnets", Zagnif gives a variety. The title track "Garnet" puts Zagnif with Umbrella's own Mickey Diamond & Pro Dillinger giving hard hitting viciousness produced by Noble Scity's own Crucial The Guillotine. Next "It Don't Apply (Let It Fly)" teams up Upstate NY from Utica to Buffalo with production from Utica, NY's own Tone Spliff and the boom bap general out of Buffalo, Kool Taj The Gr8. A colossal posse cut happens on "Khopesh" combining O The Great, Jamil Honest, Skanks The Rap Martyr & Pee General from Bankai Fam, Juice Mega, Allah Preme, & Squeegie O over a dark and eerie production from BesKept. Another posse cut with some jewels placed in, "Brawn Intellect", finds Zagnif Nori joining with Anthem Bluez, King Bliss, & Crotona P over a Pad Scientist gem. Lastly, Hi-Speed had to complete their features with Southside Jonesy jumping in on "Deadeye" to complete the circle of the Noble Network over Bigga Boo production. Enjoy the sixth installment, check the previous if you haven't, and enjoy all 6 EPs!

Raps By Zagnif Nori Except where noted in the tracklist